A. Instantaneous Velocity and Speed

You have now seen two ways to describe how fast something moves: average velocity and average speed, both of which are measured over a time interval  \( \Delta t  \). However, the phrase “how fast” more commonly refers to how fast a particle is moving at a given instant – its instantaneous velocity (or simply velocity) v.

Note that v is the rate at which position x is changing with time at a given instant; that is, v is the derivative of x with repect to t. Also note that v at any instant is the slope of the position – time curve at the point representing that instant. Velocity is another vector quantity and thus has an associated direction.

Speed is the magnitude of velocity; that is, speed is velocity that has been stripped of any indication of direction, either in words or via an algebraic sign. (Caution: Speed and average speed can be quite different.) A velocity of +5 m/s and one of -5 m/s both have an associated speed of 5 m/s. The speedometer in a car measures speed, not velocity (it cannot determine the direction).

2. Sample problem – Velocity and slope of versus t, elevator cab

Figure 2-6a is an x(t) plot for an elevator cab that is initially stationary, then moves upward (which we take to be the postitive direction of x), and then stops. Plot v(t).

We can find the velocity at any time from the slope of the x(t) curve at that time. 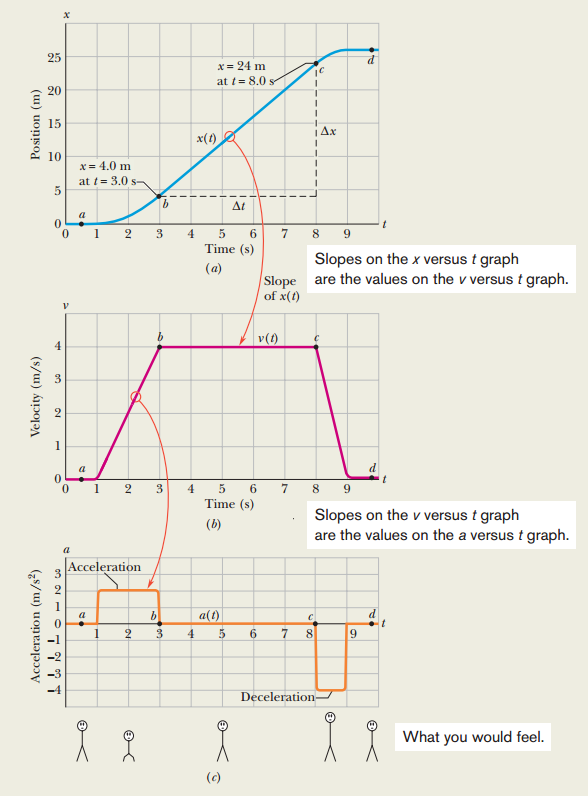 The plus sign indicates that the cab is moving in the positive x direction. These intervals (where v = 0 and v = 4 m/s) are plotted in Fig.2-6b. In addition, as the cab initially begins to move and then later slows to a stop, v varies as indicated in the intervals 1 s to 3 s and 8 s to 9 s. Thus, Fig.2-6b is the required plot. (Figure 2-6c is considered in Module 2-3.)

Given a v(t) graph such as Fig.2-6b, we could “work backward” to produce the shape of the associated x(t) graph (Fig.2-6a). However, we would not know the actual values for x at various times, because the v(t) graph indicates only changes in x. To find such a change in x during any interval, we must, in the language of calculus, calculate the area “under the curve” on the v(t) graph for that interval.

(This area is positive because the v(t) curve is above the t axis.) Figure 2-6a shows that x does indeed increase by 20 m in that interval. However, Fig.2-6b does not tell us the values of x at the beginning and end of the interval. For that, we need additional information, such as the value of x at some instant.

B. Problems and Solutions

Example 1. An electron moving along the x axis has a position given by \( x=16t{{e}^{-t}}\text{ }m \), where t is in seconds. How far is the electron from the orgin when it momentarily stops?

If a concern develops about the appearance of an argument of the exponential (-t) apparently having units, then an explicit factor of  \( \frac{1}{T} \) where T = 1 second can be inserted and carried through the computation (which does not change our answer).

The result of this differentiation is

b) Is it moving in the positive or negative direction of x just then?

c) What is its speed just then?

d) Is the speed increasing or decreasing just then? (Try answering the next two questions without further calculation.)

e) Is there ever an instant when the velocity is zero? If so, give the time t; if not, answer no.

f) Is there a time after t = 3 s when the particle is moving in the negative direction of x? If so, give the time t; if not, answer no.

a) The velocity of the particle is

We use the functional notation x(t), v(t), and a(t) in this solution, where the latter two quantities are obtained by differentiation:

f) We arrived at the graph on the right (shown above) by adding 20t to the x(t) expression.

g) Examining where the slopes of the graphs become zero, it is clear that the shift causes the v = 0 point to correspond to a larger value of x (the top of the second curve shown in part (e) is higher than that of the first).

We use Eq.2-2 for average velocity and Eq.2-4 for instantaneous velocity, and work with distances in centimeters and times in seconds.

f) The answer to part (a) is given by the slope of the straight line between t = 2 and t = 3 in this x-vs-t plot. The answers to parts (b), (c), (d), and (e) correspond to the slopes of tangent lines (not shown but easily imagined) to the curve at the appropriate points. 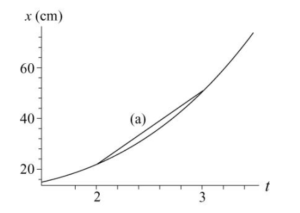 Position, displacement, and average velocity – Problems and solutions Example 1. You drive a beat-up pickup truck along a straight …
Read more!

Position, displacement, and average velocity 1. What is Physics?One purpose of physics is to study motion of objects – how …
Read more!